The Euro Is back at around 1.18 after the Central Banks' Excitement 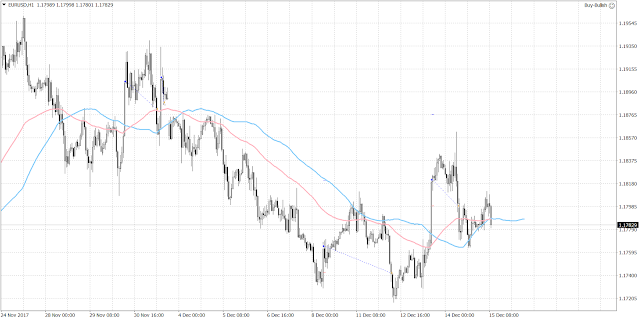 The Fed raised the rate by 0.25% on Wednesday as expected.  Nothing new came out of the 2-day meetings that we had already known.  They will still raise interest rates next year.  However, they did mention that the labor market might not strengthen further.  All that sent the U.S. dollar decidedly lower against all major counterparts.

The ECB left the rates unchanged, indicated stronger than expected economic growth, which fueled the euro to rocket higher against the U.S. dollar.  However, it was short lived.  The QE is still on the table.  The ECB president also cautioned the down-side inflation risk, which encouraged the euro sellers to step in.  The euro lost almost 100 pips after the initial upward move.

The euro recovered some of its losses from yesterday and remained sideways in quiet trading today.

A buy position was opened from my MT4 EA after the U.S. rate decision, but ended with a loss.